1. The Kite Under the Rain (Cánh Diều Mưa)

A stuntman finds himself in trouble when a mysterious man suddenly stands between him and his girlfriend in Bangkok.

The horror film, The Bloody Hand, is directed by Quốc Võ, a local Vietnamese American filmmaker who has made films both in the U.S. and Việt Nam. What makes this film so interesting is its regional appeal. Shot on location in Little Saigon, where a dominant majority of Vietnamese Americans presently live in the U.S., the film is full of references about Vietnamese American life. One of these details is the migration of recent Vietnamese immigrants like the female character by the name of Hiền who has come to the U.S. as a student. Renting a room from a woman whose daughter (Liên) has just passed away, Hiền encounters strange goings-on soon after she moves in. What she sees are nightmarish visions and hallucinations of murder, rape, and revenge. Primarily a horror film, the film also features a budding love story between Hiền and Sơn, a photographer and detective who helps with a case involving the murders of some notorious gangsters in the area. Alongside this story is a more fraught one with police officer Hùng, who is investigating the case of the Blue Dragon Gang and has problems in his marriage. A father of two, Hùng (played by Đức Tiên, an actor primarily of Vietnamese films and television) is married to Hằng (played by Thúy Nga singer Quỳnh Mai). The couple’s marriage is suffering because of the demands made by his job. The stories of all of these characters come together through the character of Hiền, who holds the key to solving the murder mysteries and is herself in danger of being possessed by Liên’s vengeful ghost. The film poses the question: Will Hiền be saved or will she be condemned to be a wandering ghost forever? - Lan Duong 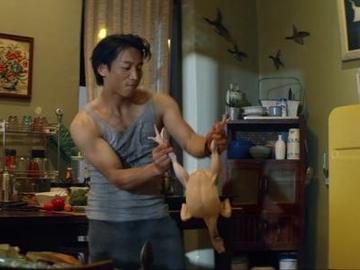