Song Lang showcases director Leon Le’s vivid imagination as a nuanced filmmaker who has keen sensibilities, enabling him to captivate an audience with a haunting story, exquisite music, and mesmerizing visuals. Masterfully played by newcomer Lien Binh Phat, Dung works for an underground loan shark as a debt collector and is jaded by his task of inflicting pain to extract payments. Eager to please, cải lương (modern Vietnamese folk opera) performer Linh Phung, played by popular V-pop singer Isaac, has yet to experience profound love or heartbreak, which his mentor informs him is needed to give a genuinely great performance. Their lives intersect when Dung threatens Linh Phung’s cải lương troupe, which is heavily in debt. Dung’s ruthless, brooding demeanor is juxtaposed to Linh Phuong’s hopeful innocence. Whereas Dung has suppressed his emotions to avoid confronting his tortured past, Linh Phuong is refreshingly sentimental and expressive. Their smoldering attraction is undeniable and in their tender moments roaming the city, they learn of common threads in their disparate lives. These unforgettable encounters are set against the gritty, but alluring backdrop of 1980’s Saigon, which is the perfect staging for forging unfathomable bonds.

As a child, Leon Le dreamt of being a cải lương performer, but his hopes were dashed when he immigrated as a teen with his parents to Orange County. Instead, he became a successful Broadway musical dancer, but he never forgot his aspirations, which he affectionately interwove into Song Lang, his first feature film. Le’s utmost devotion and respect to this lyrical art form is evident with the meticulousness in which he revitalizes beloved melodies as well as crafting new lyrics for pivotal scenes in the narrative. Song Lang has received rave reviews from international film critics and won prestigious awards at international film festivals and this poetic film is destined to be an iconic classic elevating Vietnamese cinema. - Linda Trinh Vo 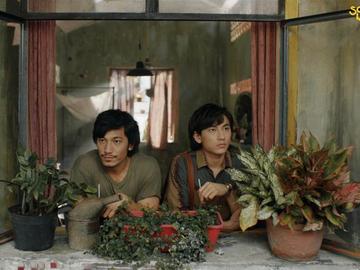